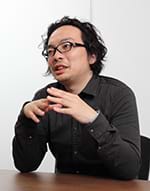 FOX International Channels (Japan), a subsidiary of FOX Entertainment Group, manages a variety of television broadcasting channels around the world including the FOX Channel, with popular titles like 24 and American Idol, and the National Geographic Channel, which broadcasts documentaries.

In July of 2012, they began providing content for Japan focusing on sports entertainment with the establishment of their division, FOX SPORTS Japan. Using creative broadcasting to air high entertainment value programming, the FOX SPORTS brand brought the excitement and emotion of sports to viewers starting on March 28, 2013. The central figure of video production system planning and installation is Masaki Sone.

“Up until now, we’ve mainly been making captions and dubbing for programs from overseas. By producing the first sports program in Japan, we can now try new live broadcasts. Producing a massive amount of video and promotional video content quickly is important now more than ever. And, as immediate evaluation of that content is necessary, errors in communication regarding color can cause us to lose a great deal of time.”

“At first, system development included a mix of monitors from many manufacturers and since there were differences between each of the models, the colors that the producer and the designer would see were different. Even when we used a single monitor to preview content with several people at once, the color would appear differently between those looking at the front of the monitor and those looking from an angle, making it difficult to communicate about color.”

FOX SPORTS’ newly-built studio
“That’s why, with the timing of our new sports programming, we wanted to make things consistent using a monitor with stable color. With the decision to install a 10-bit codec, we wanted to support 10-bit signals for better color reproducibility. That’s why we decided on EIZO’s ColorEdge.”
“In the past, we had installed EIZO’s standard FlexScan Series for both the sub and master control rooms. There was a lot of positive feedback on the color reproducibility of video and usability of the monitors.” 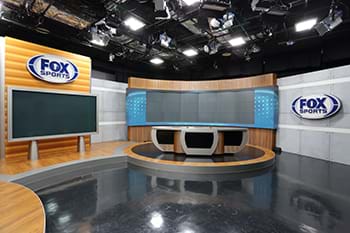 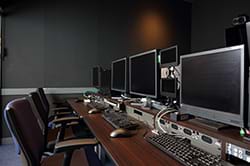 “We installed 10 ColorEdge CX240 monitors. The ColorEdge’s greatest feature is color correction. With it, we can manage the color of every monitor to maintain consistency. We adjust to comply with SMPTE-C, the current color broadcasting standard in the US.”

“With ColorNavigator dedicated calibration software, we are able to prepare profiles for various broadcasting standards. We can easily calibrate the ColorEdge to the target value. We apply the color space and gamma settings defined in the SMPTE-C standard to every ColorEdge monitor we installed. Also, we use the built-in sensor to automatically adjust the monitors on each floor every 200 hours to maintain a correct display without additional time and effort.”

“Our producer at FOX SPORTS Japan says that these are ‘wonderful monitors that we can use with peace of mind.’ They are especially good for our designers using CINEMA 4D, AfterEffects, and Photoshop to create promos and superimposed subtitles in 3DCG. Depending on the monitor, certain colors in subtitles and backgrounds have a tendency to display inaccurately. When doing preliminary editing with the ColorEdge, we can easily check those colors and increase the quality of the finished product.” 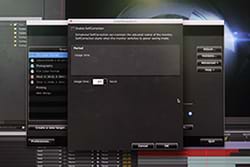 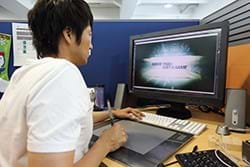 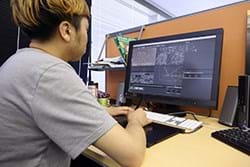 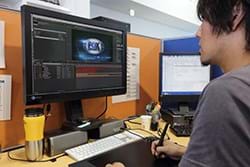 According to Mr. Sone, he would like to gradually change out the other monitors to create an environment with consistent color standards. EIZO will continue to develop monitors that meet the needs of the video production and editing markets and contribute to the progress of FOX International Channels (Japan) programming and work efficiency.